Which country has the fastest growing economy in the world?

As year 2017 ended first let's see which country grew the most last year. According to IMF following countries were the fastest growing economies in the world:

So Why this countries grew faster then rest of the world?

For Libya it's quite straightforward, country is really depending oil prices, as oil and petroleum products make more than 98% exports of Libya, In 2017 oil prices went a little bit up - that's why economy recovers. If you take a look at Libya gdp growth charts you will see a lot of interesting up and downs which corresponds to war times in country and oil prices.

Bhutan is whole another story, it has steady economic progress from 2000th year. in 2000 Bhutan gdp was just 439 millions usd, now 2.63 billion usd - that's nearly 6 times increase. Reason for that is India, India is a Bhutan's main export and import partner and grows really fast last years. Also Bhutan is a part of SAFTA free trade organization which speeds up it's development.

Ghana's gdp is growing fast last years, similar to Bhutan it grow from 8.11 billion (2000) economy to 45.46 billion usd (2017). That makes 5.6 times increase in nominal GDP which most countries in the world can only dream about, but unlike Bhutan this economic growth is only because of 3 export goods (gold, oil, cocoa). There isn't any significant production in Ghana, only Tourism is worth noting which accounts for less than 5% of gdp.

Ethiopia is a really rising star in the African region, gdp was just 8.2 billion usd in 2000, last year it's 79.74 billion. It's nearly 10 times increase, I think Ethiopia will continue this trends, because it has real economy, more than 40% of GDP is agriculture, also agriculture accounts for 81% exports. Last years there is good growth in manufacturing, especially textile and leather production is promising. Also worth to note that 1.8 percent of export is machines and  Ethiopian airlines are the biggest one in whole African continent.

Don't get fooled by Yemen's growth, it's just recovery from the war that was going from 2014. Actually Yemen had really good growth until then.

If we take a look at the biggest economies, the best performers were India (7.4%) and China (6.5). If we take a look at region based South-Eastern Asia is the fastest developing region. Some countries have really good growth rate: Myanmar (7.6%), Bangladesh (7%), Lao (6.9%), Cambodia (6.8%), Philippines (6.7%), Vietnam (6.%). This countries have good economic ties with China - and results show us global power shift to the Asia. 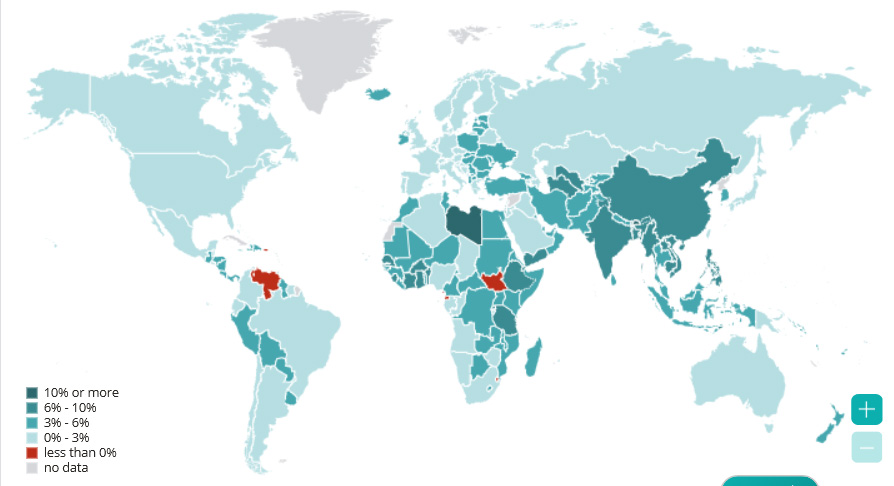 Which countries get the most Chinese investment?
When will China overtake the US to become the largest economy?