What language do Jews speak?

Jews don't speak just one language, because jew is not an ethnicity or nation. It's a religious group similar to Christians, Buddhists or Muslims. We don't have Muslim language or Christian language, similar to that we don't have Jewish language.

Question can be like this: "Which languages do Jewish believers speak or have spoken in history?". Let's start from Jews from Germany, they are called Ashkenazi community and speak Yiddish as native language, Yiddish is just a dialect of German language. Another example would be Ethiopian Jews, their language is Amharic - which is spoken in Ethiopia generally people from all religions. Jews in Georgia speak dialect of Georgian language, Jews in Azerbaijan speak dialect of Tat language. These are the languages of their ancestors before they adopted new religion.

Another interesting fact about Karaims, they mainly live in Ukraine - but speak Turkic language. They are descendants of Khazars which was Turkic State where some of people adopted Judaism. Karaims speak same language as Lipka Tatars and Crimean Tatars - first being mainly believers of Christianity, second one mainly Muslim.

There might be another question, "What language did first believers of Judaism spoke?", similar to we know that first Arabs started believing in Islam or Palestinians to Christianity. Answer would be they speak different dialects of Semitic languages which includes Hebrew, Arabic, Ugaritic.. etc. But we should note that Hebrew was a dead language until in 1948 Israel government was created, they revived language and made it official language. Hebrew language is really close to Arabic language, because they are inside same language group and branch called Central-Semitic branch of Semitic languages which is inside larger Afro-Asiatic language family. If you come to main question, answer is there isn't any Jewish language, similar to there isn't Christian language - it's just a religious community. 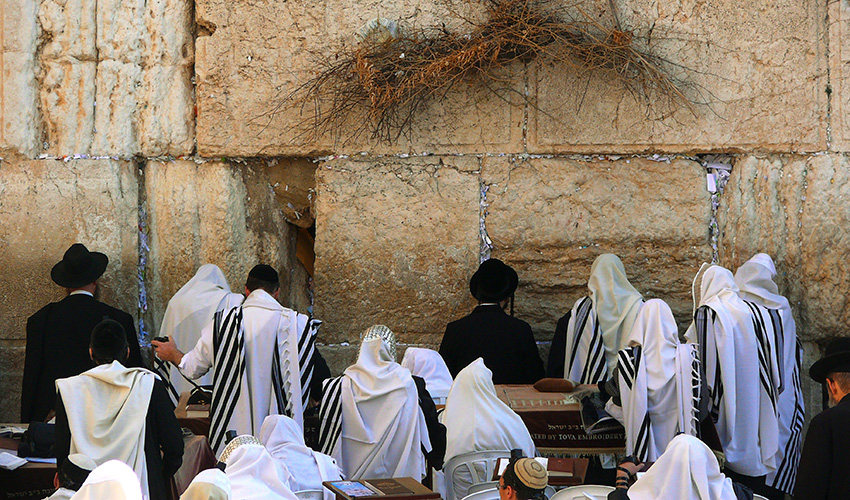 What's the oldest country in the world?
How similar is Azerbaijani to Turkish?